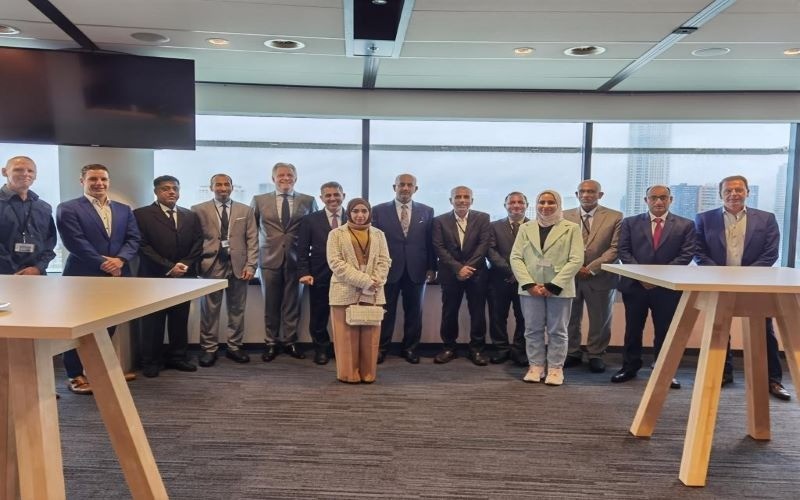 HE Dr. Ali bin Masoud Al Sunaidy, Chairman of the Public Authority for Special Economic Zones and Free Zones (OPAZ), visited the International Port of Rotterdam in the Kingdom of the Netherlands and met with Allard Castelein, CEO at Port of Rotterdam and a number of officials. During the meeting, both parties discussed mechanisms to activate the joint cooperation between Port of Sohar, Port of Rotterdam and the free zones in the Sultanate of Oman. They also touched on ways to maximise the benefits of renewable energy for the production and export of green hydrogen. On the other hand, the delegation visited a number of facilities operating in the areas adjacent to Port of Rotterdam, including facilities of green fuel production and emission of the associated carbon dioxide resulting from industrial production operations.

The Chairman and accompanying delegation also met with a number of port officials and companies operating in the fields of logistics, information technology and energy. On the sidelines of this visit, the Chairman met with a group of trainees who are on a scholarship programme from the Sohar Free Zone and Sohar Port.

By clicking “Accept All Cookies”, you agree to the storing of cookies on your device to enhance site navigation, analyze site usage, and to ensure best user experience.

When you visit any website, it may store or retrieve information on your browser, mostly in the form of cookies. This information might be about you, your preferences or your device and is mostly used to make the site work as you expect it to. The information does not usually directly identify you, but it can give you a more personalized web experience. Because we respect your right to privacy, you can choose not to allow some types of cookies. Click on the different category headings to find out more and change our default settings. However, blocking some types of cookies may impact your experience of the site and the services we are able to offer.

These cookies are necessary for the website to function and cannot be switched off in our systems. They are usually only set in response to actions made by you which amount to a request for services, such as setting your privacy preferences, logging in or filling in forms. You can set your browser to block or alert you about these cookies, but some parts of the site will not then work. These cookies do not store any personally identifiable information.

These cookies allow us to count visits and traffic sources so we can measure and improve the performance of our site. They help us to know which pages are the most and least popular and see how visitors move around the site. All information these cookies collect is aggregated and therefore anonymous. If you do not allow these cookies we will not know when you have visited our site, and will not be able to monitor its performance.

These cookies enable the website to provide enhanced functionality with accessibility features. Accessible design improves access to information on the web for individuals with and without disabilities. Well-designed, accessible web sites expedite the delivery of information and services. If you do not allow these cookies then some or all of these services may not function properly.

Social Media Share is added to our pages using a third party provider, providing customizable social sharing tools, which makes sharing online content simple. This 3rd party integration gathers information regarding the browsing and sharing activities of users .If you do not allow these cookies then all of these services may not function properly.